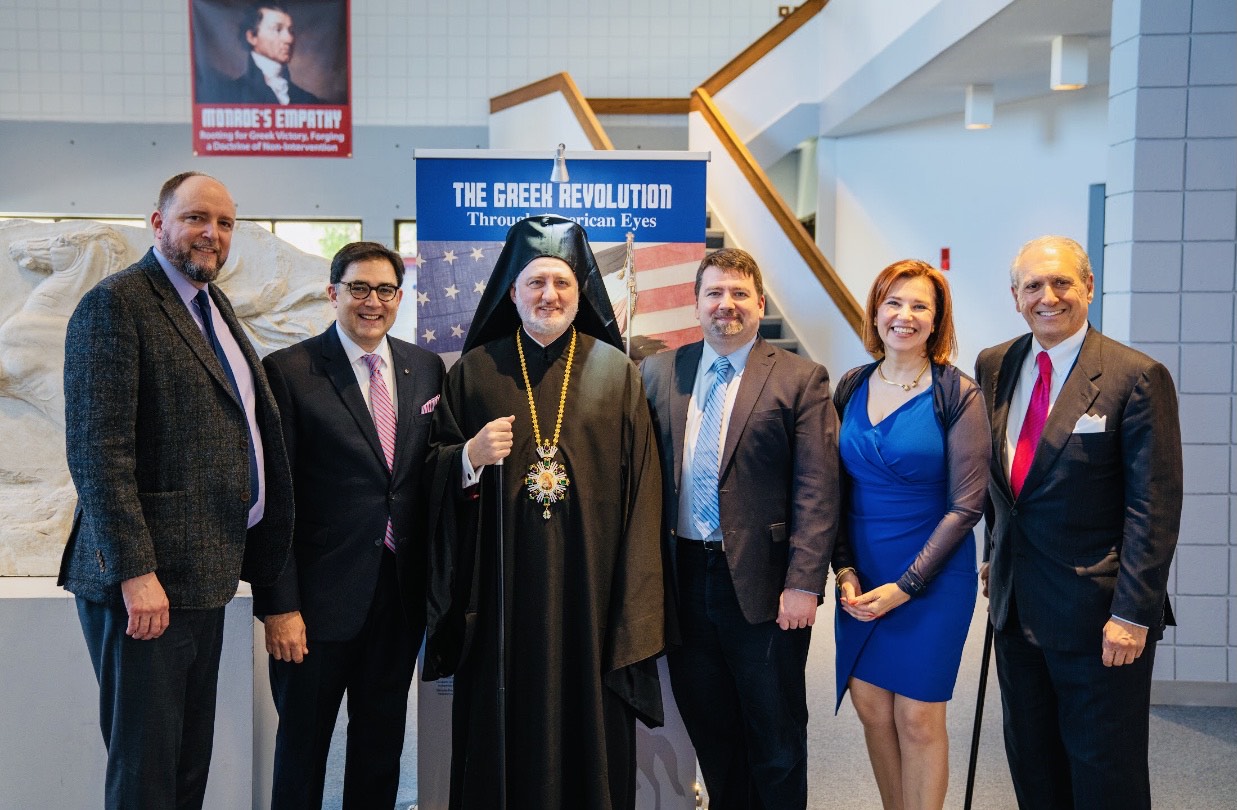 On Tuesday, March 30, a major exhibition, The Greek Revolution through American Eyes, opened with a celebratory event at the Maliotis Cultural Center of Hellenic College Holy Cross. In addition to the invited guests present at the Center, Greeks and Hellenophiles everywhere were able to watch the live-streamed opening on the exhibition website, www.greekrevolution.org.

This traveling and online exhibition is the fruit of a partnership between the Maliotis Center and the Dean C. and Zoe S. Pappas Interdisciplinary Center for Hellenic Studies of Stockton University. Consisting of 22 large panels with images of seminal documents and artifacts, it explores the common themes binding Greece and the United States in Greece’s pursuit of liberty and also examines the formation of US identity in the nation’s first fifty years. Drs. Tom Papademetriou of Stockton and Nicholas Ganson of Hellenic College are co-directors of the exhibition, which will remain on view at the Maliotis Cultural Center through October 15, 2021.

The ceremony began with the singing of the American and Greek national anthems, followed by Ti Ypermacho, chanted by HCHC’s St. Romanos the Melodist Byzantine Choir under the direction of Rev. Dr. Romanos Karanos, Assistant Professor of Byzantine Liturgical Music. The choir later offered a stirring medley of Greek patriotic songs from the revolutionary period.

HCHC’s President, George M. Cantonis, serving as master of ceremonies, welcomed everyone and introduced His Eminence Archbishop Elpidophoros of America, who is also Chairman of HCHC’s Board of Trustees. His Eminence offered prayers in Greek and English, then praised the exhibition as “most remarkable and most significant” and President Cantonis for the kind of leadership “that we could only dream of a few years ago.”

Greece’s Consul General in Boston, Stratos Efthimiou, spoke warmly of the longstanding ties between Greece and the United States so vividly chronicled in the exhibition, and of HCHC’s active role in perpetuating those ties. Greek Ambassador to the United States, Alexandra Papadopoulou, who recently visited the campus, echoed those sentiments in a video message and promised to return in the near future to see the exhibition.

Representing Stockton University was Dan Nugent, Chief Development Officer and Executive Director of the University Foundation, which helped to fund the exhibition. He said, “We are thrilled to see this exhibition come to fruition and look forward to continuing partnership for many years to come.”

Dr. Timothy Patitsas, Interim Dean of Hellenic College, spoke about Greek influence on numerous other civilizations before and after the Christian era and affirmed the mission of HCHC to honor the Orthodox faith and Greek culture. He introduced Drs. Papademetriou and Ganson, who spoke about the themes of the exhibition and the process of research, planning, and production that made it a reality. They acknowledged the “lead role” that students from both institutions, two of whom also spoke, played in that process.

Many of the speakers expressed deep appreciation to the late Professor Philip Seraphim, a distinguished scholar and champion of Hellenism, who served for over a decade as president of the Maliotis Cultural Center. And all acknowledged the extraordinary efforts of Presvytera Chrysoula Kourkounti, Coordinator for the Center, without whose indefatigable energy and organizational skills the memorable opening ceremony could not have happened.