THE HEART
OF OUR
COMMUNITY

At Hellenic College Holy Cross Greek Orthodox School of Theology, our mission is to prepare men and women for leadership by creating an environment that fosters growth in knowledge, faith, and service. Because of its Orthodox Christian identity, the Hellenic College Holy Cross environment is not passive when it comes to the question of faith. It does not hesitate to raise the question of faith. On the contrary, it recognizes that faith is precious and that society gains when its leaders are grounded in faith after having devoted themselves to an experience wherein their faith can be deepened. Our school environment, with Holy Cross Chapel at its heart, provides people with the opportunity to have such an experience. 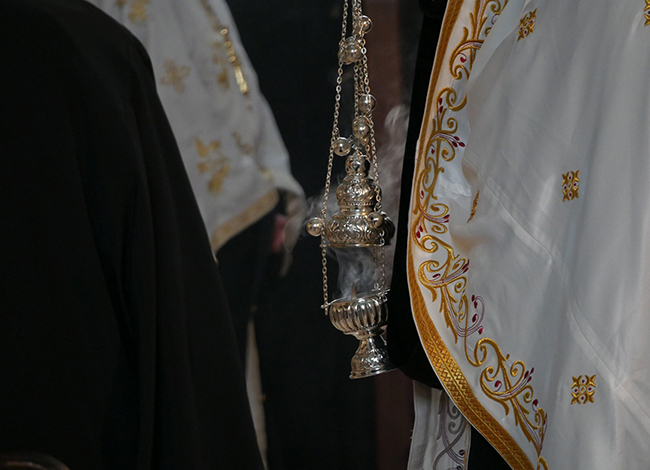 The Office of Student Life and the Ecclesiarch offer weekly baking sessions for not only the altar teams, but the whole HCHC community. Held in the lower Condakes Refectory Kitchens. […]

Holy Cross Chapel is located at the highest point of the Hellenic College Holy Cross campus. It is built in the Byzantine style typical of the 11th and 12th centuries and modeled after the Church of the Holy Apostles in Athens, Greece.

Under the leadership of Archbishop Michael of blessed memory, the Greek Orthodox Youth of America (GOYA) raised the funds for the construction of the Chapel. The Chapel is dedicated to the memory of the Archbishop and all of those who came to America in earlier years and planted the faith here. The first services in the Chapel were held at the graduation exercises in 1963. Beautiful mosaics of the Pantocrator and the Platytera by Demetrios Dukas grace the interior.

Extensive renovations to the interior and exterior of the Chapel were made in recent years. Many relics in the Chapel are available for veneration. A large blessing cross with a piece of the True Cross is kept in the sanctuary. Three hierarchs are buried outside, behind the apse on the east side of the Chapel: Archbishop Iakovos of North and South America, Metropolitan Silas of New Jersey, and Bishop Gerasimos of Abydos. 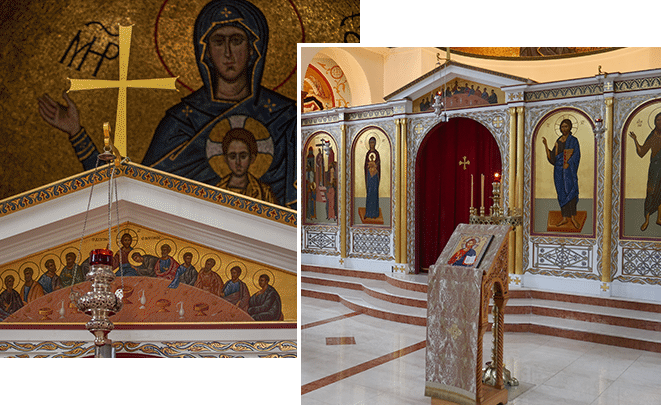 Archimandrite Athenagoras Ziliaskopoulos was born in 1970 in Reutlingen, Germany, and grew up in Greece and Germany. He spent his early adulthood on Mount Athos as a monastic and learned to live a life devoted to Christ and the Church. He was ordained to the Holy Diaconate in 1997 and the Holy Priesthood in 1998 by His Eminence Metropolitan Augoustinos of Germany. In 1999, he was elevated to the rank of Archimandrite to the Ecumenical Throne by His All Holiness Ecumenical Patriarch Bartholomew.

For over twenty years, Archimandrite Athenagoras served as a parish priest starting at the Greek Orthodox Metropolis of Germany with successive appointments. He was appointed as the Hierarchical Vicar of the Greek Orthodox Metropolis for two States in Germany and was a member of the delegation of the Ecumenical Patriarchate for Ecumenical Theological dialogues. He served as a member of the Ecumenical and Interfaith Councils, the founding chairperson of the Interfaith Council of Religions, and as a chairperson for one of the Assemblies for Orthodox Clergy. He was a frequent speaker at universities, public schools, interfaith groups, cultural associations to discuss Orthodox life and spirituality. Among his many accomplishments in Germany, Archimandrite Athenagoras established the first Orthodox Chapel in the international Frankfurt Airport and a 24-hour Orthodox crisis hotline; he founded the first Greek Orthodox youth camp near Frankfurt; spearheaded the archeological renovation of a 15th-century church; and built a church and community center from the ground up.

In 2017, Archimandrite Athenagoras relocated to Toronto, Canada at the invitation of His Eminence Sotirios Archbishop of Canada to serve as Dean of the Patriarchal Theological Toronto Orthodox Theological Academy and Office Director for the Greek Orthodox Archdiocese of Canada. In 2019, he transferred to the United States of America, at the request of His Eminence Elpidophoros Archbishop of America, to offer his ministry to the Hellenic College Holy Cross Greek Orthodox School of Theology, in Boston, Massachusetts. In 2021, Archimandrite Athenagoras was appointed Chief Secretary of the Holy Eparchial Synod of the Greek Orthodox Archdiocese of America and as the Spiritual Advisor to the Greek Orthodox Ladies Philoptochos Society of America.

Archimandrite Athenagoras holds a Bachelor of Arts, a Bachelor of Theology, a Masters of Theology, and a PhD in Theology from Aristotle University of Thessaloniki, Greece. He also took classes in Pedagogics, German Literature, Roman Catholic and Protestant Theology, Judaism, Islamic Studies and Comparative Religious Studies at the Johann Wolfgang Goethe University in Frankfurt, Germany. Fluent in modern and ancient Greek, German, and English, proficient in Turkish and has a basic understanding of Latin, French, and Koranic Arabic. 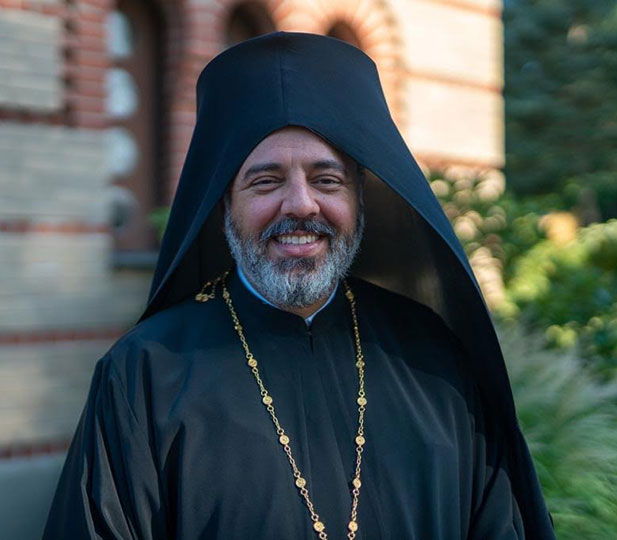