In the United States, accreditation is the primary process for assuring and improving the quality of higher education institutions. Accreditation is a process that brings together all of Hellenic College Holy Cross’ stakeholders to ensure HCHC offers the highest quality education to its students while meeting the best practices of higher education. HCHC is accredited by the New England Commission of Higher Education (NECHE) and Holy Cross Greek Orthodox School of Theology is accredited by the Association of Theological Schools (ATS). In addition, HCHC develops and implements policies and procedures to meet the regulatory requirements of the Department of Higher Education of the state of Massachusetts.

This site is updated regularly providing transparency about the accreditation process to HCHC’s stakeholders. 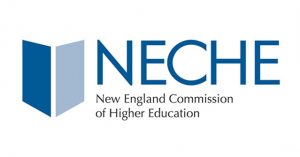 The comprehensive evaluation is made up of three primary components:

Dr. Kathleen Ryan and Dr. Nicholas Ganson are the co-chairs for the self-study. Together, they are working with writing teams for each of the nine Standards for Accreditation to develop this central document to the comprehensive evaluation.

To better prepare for the comprehensive evaluation the Office of Institutional Research and Assessment at HCHC undertook a self review of the NECHE Standards with various constituencies across the campus. Respondents were asked to evaluate HCHC’s performance in meeting the dimensions of quality under each standard. The results of this preliminary self review can be found here. To learn more about this self review please contact Fr. Nicholas Metrakos (nmetrakos@hchc.edu).

If you would like to submit a comment about our ten year comprehensive evaluation please email academicaffairs@hchc.edu.

Holy Cross School of Theology is hosting a comprehensive evaluation visit for reaffirmation of accreditation by the ATS Commission on Accrediting in September 2023. The purpose of this visit is to verify that the school meets all applicable Commission Standards of Accreditation. Fr. Romanos Karanos is the chair for the ATS self-study. Comments regarding how well the school meets those standards and/or generally demonstrates educational quality may be sent to the ATS Director of Commission Information Services at least two weeks before the visit. Comments may also or instead be sent in writing to Dr. Diana Demetrulias, Vice President for Academic Affairs or Dn. Gary Alexander, Vice President for Administrative Affairs. All comments will be shared with the onsite evaluation committee.

Inquiries regarding the accreditation status by the Commission should be directed to the administrative staff of the institution.

On March 4, 2021, the New England Commission on Higher Education (NECHE) voted to remove the probationary status HCHC had been under since December 10, 2019.

“I want to thank the students who entrusted us with their education,” said HCHC President George M. Cantonis “I am appreciative of our dedicated faculty and staff for working tirelessly in fulfilling our mission. And I thank His Eminence Archbishop Elpidophoros of America, Chairman of our Board, Fr. Jon Magoulias, Vice-Chairman, and the entire Board of Trustees for believing in and supporting our leadership.”

On learning of NECHE’s decision, His Eminence said, “My heart is filled with joy upon hearing that HCHC is no longer on probation and is continued in accreditation. I especially want to thank the President of our beloved School, Mr. George Cantonis. His role in leading the movement to achieving this status through his service, dedication, and tireless hard work cannot be underscored enough. I also would like to thank the HCHC Board of Trustees, the Prime Minister of Greece, Mr. Kyriakos Mitsotakis, Leadership 100, and all the supporters and donors of our School who have helped make this a reality, so that we can continue to offer a high standard of excellence in education for the Greek-American omogeneia and for the future clergy and lay leaders of our Archdiocese.”

“We all know how critical this has been for the future of our School and Church,” said Fr. Magoulias. “Speaking for the entire Board, I commend President Cantonis, the School administration, faculty, and staff, who have all done an outstanding job in leading us to this point.”

The road to recovery for HCHC began in the fall of 2019, when President Cantonis (then Vice-Chairman of the Board of Trustees), Elaine Allen, Treasurer of the Archdiocese, and Dn. Gary Alexander, VP for Administrative Affairs, represented the School at a NECHE Show Cause Commission hearing to discuss HCHC’s status. The Commission subsequently placed Hellenic College, Inc., on probation for a period not to exceed two years. NECHE also reiterated its plan to undertake a fall 2020 site visit to HCHC.

Since December 2019, when Mr. Cantonis became President, he and his team have worked closely with NECHE to address key issues. This entailed a disciplined approach to managing finances, improving the operation, and bolstering academics. HCHC produced multiple reports for NECHE and kept in close contact with them to demonstrate the School’s steady and continuous improvement.

In October 2020, NECHE sent their team of academic experts to observe and analyze HCHC’s operation. The site visit team reviewed many aspects of the School and produced a report citing concerns. From then until the beginning of February 2021, President Cantonis led a pragmatic effort to address the issues cited. This work culminated in a voluminous update report sent to NECHE on February 15, 2021, that detailed every facet of improvement in these areas and more. This report, together with the positive meeting on March 4, demonstrated that HCHC is on the road to financial, organizational, and academic planning recovery. The School was represented at the meeting by President Cantonis; Diana Demetrulias, VP for Academic Affairs; Dn. Gary Alexander, VP for Administrative Affairs; and Nick Papakyrikos, HCHC’s contracted CFO.

President Cantonis commented, “NECHE’s endorsement of our work is very gratifying. I believe that the dedication and hard work of the administration, faculty, and staff has brought us this welcome outcome. However, the material we presented to NECHE is a plan, and we must remain focused and deliver on that plan.”