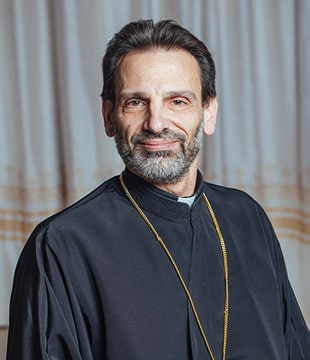 Rev. Philip Zymaris joined the faculty in 2005. Originally from New York, he did his BA at Hellenic College (1988) and his MDiv at Holy Cross Greek Orthodox School of Theology (1991). He then went to Thessaloniki to continue his studies at the Aristotle University of Thessaloniki, from which he obtained his ThD (2000). He was ordained and affiliated with the Patriarchal Institute for Patristic Studies and was involved in the preparation and administration of the theological symposia held there every autumn from 1996 on, in the context of the “Demetria” celebrations in Thessaloniki.

At Holy Cross, Fr. Zymaris now teaches in the area of Practical Theology (Liturgics). His main research interests are the evolution of liturgical piety and its impact on Church architecture, iconography, and popular religion. He also concentrates his energies on the sacramental nature of the Church and how this must ultimately be based on the life of the Holy Trinity. His philosophy is that in spite of all transitory accretions, there is an unchanging theological core and vision in the life of the Church throughout the ages. His publications include “Neoplatonism, the Filioque and Photios’ Mystagogy in the Greek Orthodox Theological Review (2001), “The Phenomenon of Per Saltum Ordinations” in Gregorios Ho Palamas (2004) (in Greek) and his doctoral dissertation in the process of being published, “The Historical, Dogmatic and Canonical Significance of the Constantinopolitan Synod of 879-880.”