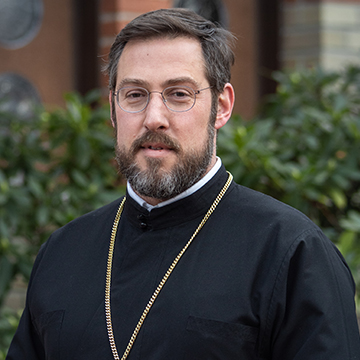 While growing up, Demetri was deeply involved in his church, Ascension Cathedral in Oakland, California. “I was totally wrapped up in the life of my parish community,” he recalls. “I was an altar boy and captain, in the dance group, at Ascension’s summer camp as a camper and then as a counselor and director. You name it, I did it, and I loved all of those experiences.”

Demetri became interested in theatrical sound and lighting in high school and honed his technical skills at every opportunity. “I got wrapped up in that as a teenager, doing events at my church and the Metropolis Folk Dance Festival, deejaying for weddings and so on.” Enjoying the work and not feeling ready for a four-year college, he took some classes but became more and more successful as a sound and lighting engineer, eventually working full-time in the Bay Area film industry and for major cultural institutions such as the San Francisco Opera. “I was close to the top of my game in that industry and had earned a name for myself.”

Then a profound personal loss made Demetri question the direction of his life and say to himself, “I need to do something more. I have to study.” He thought he might have a call to the priesthood, so HCHC seemed the right place to resume his formal education and discern his vocation. He enrolled at Hellenic College in 2014 as a sophomore Religious Studies major. “Here I was in my forties, living in a dorm with people half my age. It was a big adjustment, of course, but the best thing for me because I could live a simple and quiet life while being part of a community.”

After completing his bachelor’s degree, Demetri entered the Master of Divinity program at Holy Cross, where he is a second-year seminarian–and no longer lives in the dorm for single students. He and his wife Vasso, a physician’s assistant, recently celebrated their first wedding anniversary. “Our families had known each other for years,” he says, “but we first met at a charity event at Ascension.”

When we asked about his future after graduation, Demetri said God willing, I will be ordained and then Vasso and I will go wherever we are needed, wherever Metropolitan Gerasimos wants me to serve.” It is our pleasure to report that Fr. Demetri was ordained to the Holy Diaconate on October 10, 2020 and to the Holy Priesthood the following day, October 11, 2020 by His Eminence Metropolitan Gerasimos of San Francisco at the Ascension Cathedral. He began his ministry as the second priest at St. Demetrios Greek Orthodox Church in Seattle WA on October 15, 2020.