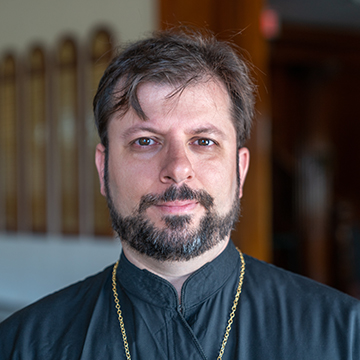 Growing up in Rio de Janeiro, Fabio was nominally Roman Catholic but not much of a churchgoer. That started to change after he finished university in Rio and moved to England for two years, where he did research for a financial consulting company. “God had a plan for me,” he says. “My best friend had icons in her home. There was a shop near my flat where the owner was an Orthodox Cypriot. I used to talk to him and realized I didn’t know much about Christianity and very little about Orthodoxy.”

By the time Fabio moved back to Brazil in 2003, he felt “generically Christian” and in need of a church where he would feel at home. “Ironically, it was a liberal Anglican friend of mine who thought I should consider becoming Orthodox,” he relates. “So I started attending a local church in Curitiba, where I had settled, and was chrismated there in 2005.” After teaching English until 2010, Fabio made a career change to IT while becoming more and more deeply committed to living an Orthodox Christian life. “There are only about four hundred Greeks in Curitiba, but the Greek community became my second family. I even joined a Greek dance group.”

Over time, Fabio began to feel that he might have a call to the priesthood. “It took me a long time to be convinced by God that I should be a priest,” he recalls–even though he was sometimes mistaken for one. Participating in his company’s charitable program for the poor, he was startled when an orphan asked him, “Sir, are you a priest?” Finally, a friend said, “You have to stop resisting grace.”

By 2014, Fabio was ready to apply to seminaries, but wasn’t sure whether to study in Greece or at Holy Cross. In the end, he chose Holy Cross “because it has many things that Greek seminaries can’t offer. The one word I would use to characterize my experience at Holy Cross is trust. Coming here was a leap of faith, as is my going back to Brazil now. I trust that God will have the final word.”