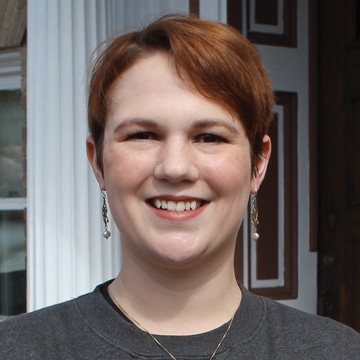 Working in radiation oncology, Jade had the satisfaction of knowing that she was helping people with cancer. “It was what I thought I was going to do with the rest of my life.” But over time she began to feel herself burning out at work and also searching “for a new church, for the ultimate truth about Christ.”

A casual visit to the annual festival at St. George’s Orthodox Church in Oklahoma City sparked Jade’s curiosity about Orthodoxy. She began attending services and learning all she could. “What drew me in was the rich liturgical life and the lives of the saints,” she remembers. When she became Orthodox, the pastor of St. George’s, Fr. John Tsaras, encouraged her to apply to Holy Cross, from which he graduated in 1996. Jade is now in her second year of the two-year MTS program, in which students gain proficiency in and understanding of Orthodox history and theology.

Although going back to school and living in a dorm took some initial adjustment, Jade is thriving at Holy Cross and loves “being around people who make you want to be a better person.” About the future beyond the MTS, she says, “I want to go on to the ThM [Master of Theology] program and eventually pursue an academic career.”