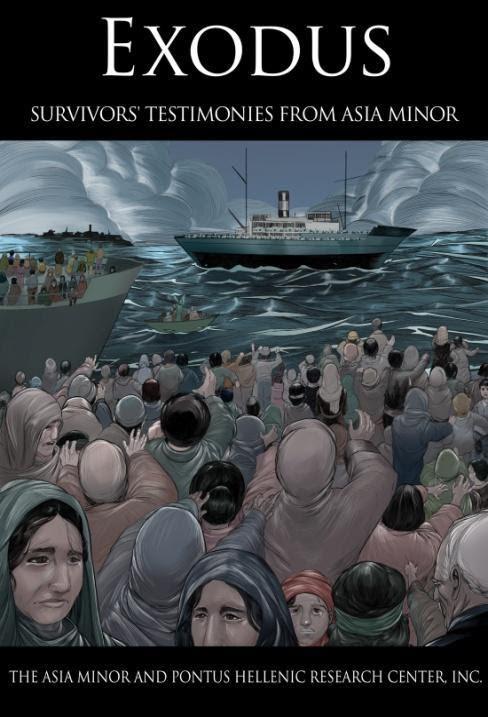 The New York Life Insurance Center for the Study of Hellenism in Pontus and Asia Minor at HCHC is proud to announce its sponsorship of the Exodus Project through a grant in the amount of $100,000. This monumental project, undertaken by the Asia Minor and Pontos Hellenic Research Center (AMPHRC) in Chicago, consists of the translation from Greek to English of hundreds of survivor testimonials from the Asia Minor Catastrophe, or the Great Catastrophe, which displaced millions of Greek from their ancestral homelands between the early 1910s and early 1920s.

The Greek original, Η ΕΞΟΔΟΣ (The Exodus), is a five-volume collection of first-hand accounts of survivors, compiled by Greek researcher Melpo Logotheti-Merlier (1890 – 1979) under the auspices of the Centre for Asia Minor Studies in Athens and published beginning in 1980. Logotheti-Merlier, a musicologist, and her grecophile husband Octave Merlier (1897 – 1976), initially launched a project recording popular songs from all over Greece, but the institute they created eventually expanded the scope of its research from music to folklore and history.

The new publication sponsored by HCHC’s New York Life Center will bring the personal stories of refugees who endured persecution and loss of homeland, and witnessed the massacre of loved ones and compatriots, to an English-language audience. Readers will be able to learn of the harrowing and heart-wrenching experiences of those who survived against all odds, while learning about the Great Catastrophe as a historical event, with consideration for its origins, context, and aftermath.

The publication will also provide scholars with a vast treasury of primary sources that allow for a closer examination of the plight of the Greeks in Asia Minor, Pontus, and East Thrace during this period and to situate the Great Catastrophe within the broader context of Ottoman nationalities policies and genocide studies. While the Armenian genocide has received increaing attention in recent years, the murder of some one million Greek Orthodox Christians between 1913 and 1923 has remained relatively understudied. This resource will help address this void in the historiography of the early 1900s. The AMPHRC also hopes that by shedding light on the Great Catastrophe, future such atrocities might be prevented.

The first volume of the geographically organized Exodus Project, devoted to Asia Minor, is slated for release in September 2022, to mark the destruction of Smyrna in September 1922. Subsequent volumes of the three-volume set will be devoted to Eastern Pontos and Western Pontos, respectively.