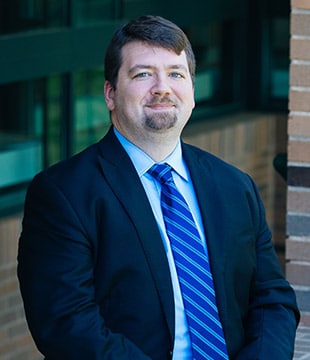 Nicholas Ganson is Assistant Professor of History at Hellenic College.  He serves as an advisor to first-year students and teaches core and elective courses in European and world history, as well as courses in religious, intellectual, and environmental history. Professor Ganson earned his B.A. in Biology from the College of the Holy Cross (1998), M.A. with distinction in History from Boston College (2000), and Ph.D. in History from the University of North Carolina at Chapel Hill (2006).  Professor Ganson has previously held full-time teaching positions at Virginia Tech, the College of the Holy Cross, and Bridgewater State University.

Prof. Ganson’s doctoral research focused on the Soviet post-World War II famine.  His book, entitled The Soviet Famine of 1946-47 in Global and Historical Perspective (New York: Palgrave  Macmillan, 2009), is a social, political, and comparative history of the famine and the only monograph on the topic by a western scholar. The monograph views the famine within the context of Soviet history, but also the histories of World War II, the Cold War, famine, and ideology.  In association with his research on the famine of 1946-47, Prof. Ganson received a Fulbright-Hays Doctoral Dissertation Research Abroad Fellowship (2003-04), Social Science Research Council Dissertation Write-up Fellowship (2005-06), and the American Association for the Advancement of Slavic Studies Graduate Student Essay Prize for his paper entitled “Exploring the Causes of Child Mortality during the Soviet Famine of 1946-47” (2005). Prof. Ganson continues to explore famine in comparative perspective and is working on an article on hunger in West Virginia during the Great Depression.

Today, Prof. Ganson’s primary research focus is on the activities of Russian Orthodox dissident priests during the late Soviet period.  He has published an article entitled “Orthodox Dissidence as De-Atomization: Father Dmitrii Dudko and His Battle with Razobshchennost’.”  Ganson asserts that, for both the Soviet government and the larger western world, the importance of the dissidents lay in their opposition to the Soviet state; thus, they were viewed both by outsiders and their own state as monochrome, political, and anti-Soviet.  In western eyes, their significance fell away with the disintegration of the Soviet system.  In examining the priests’ writings, Ganson pays heed to their worldviews and reveals that religious motives predominated over any political considerations.  He emphasizes that purely spiritual strivings can and, in this case did, have political implications, but that consequences should not be confused with motive.

Prof. Ganson loves teaching history and engaging in discussion with students on historical topics both in and outside of the classroom.  In his courses, he places a particular emphasis on developing research, writing, and argumentation skills. When he is not teaching, Prof. Ganson enjoys conducting his parish choir, learning sacred music, fine-tuning his culinary skills, and spending time with his family.  Ganson, a Boston native, is also an avid fan of local sports teams.