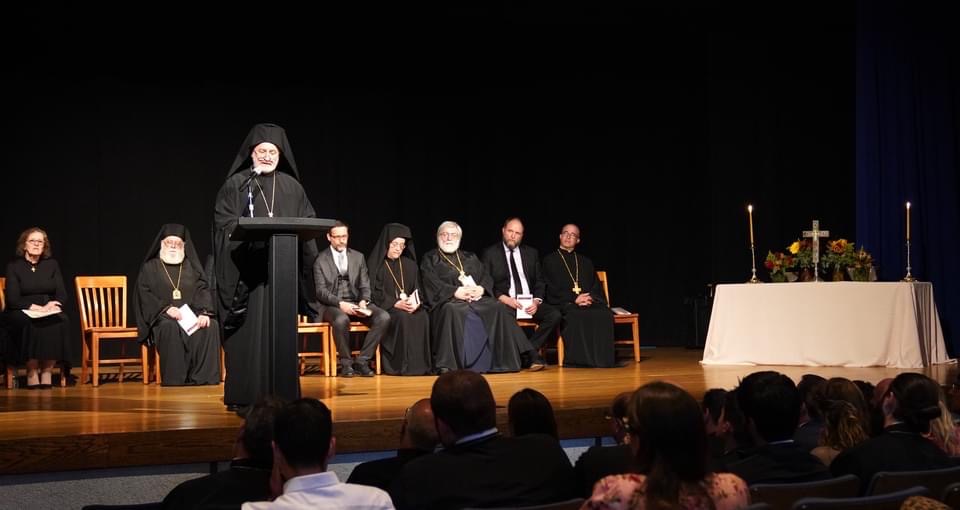 Convocation is an annual event at many schools, including Hellenic College Holy Cross, at which the faculty, administration, and staff formally welcome new and returning students to campus early in the academic year. The ceremony is always celebratory, but never more so than this year, when Hellenic College Holy Cross held its first Convocation since before the pandemic and did so at the Maliotis Cultural Center on September 14, the Feast of the Universal Exaltation of the Holy Cross, the School’s feast day.

His Eminence Archbishop Elpidophoros of America offered the opening invocation, after which HCHC President George M. Cantonis welcomed all those present, especially the new students. He said, “Our mission is not only to educate your minds, but to deepen your faith.” He exhorted the students to “choose the life you wish to lead” and engage actively in all aspects of life on campus so as to make the most of their education and begin to chart their paths forward.

Next to speak was the recently appointed Consul General of the Hellenic Republic in Boston, the Honorable Symeon Tegos. In his short time in Boston, Mr. Tegos has already visited HCHC on numerous occasions, attending Chapel services as well as meetings. In his remarks, he expressed his intent to forge close relations between the Consulate and the School, saying, “We are always going to be at your side, proud and full of love…”

President Cantonis then introduced Dr. Diana Demetrulias, Vice President for Academic Affairs, as “the most important person on this campus” for playing the central role in securing the institution’s increasingly positive status with the accrediting agencies. Dr. Demetrulias, the first in her large family to go to college, shared a story from her own academic journey to illustrate the importance for students of having mentors to help them realize their full potential. She praised HCHC’s faculty for their “love of teaching and their unshakeable dedication to students and student learning,” and urged students to “study hard, think hard, play hard, and pray hard.”

The program concluded with the keynote address by His Eminence Archbishop Elpidophoros, Chairman of HCHC’s Board of Trustees. His Eminence reflected and expanded upon the passage from St. Paul’s Epistle to the Romans that served as the theme of this year’s Convocation: “So we, being many, are one body in Christ, and individually members of one another.” His Eminence observed that “there is a beautiful unity and concord in investing yourself in the benefit and success of one another…My prayer in this new academic and ecclesiastical year is that each of you will explore what it means to be members of one another…Let us make of this year an experiment to wear the seamless robe of Our Lord in our hearts…”

Convocation was livestreamed and may be viewed in its entirety on youtube.com/user/HCHCMedia.