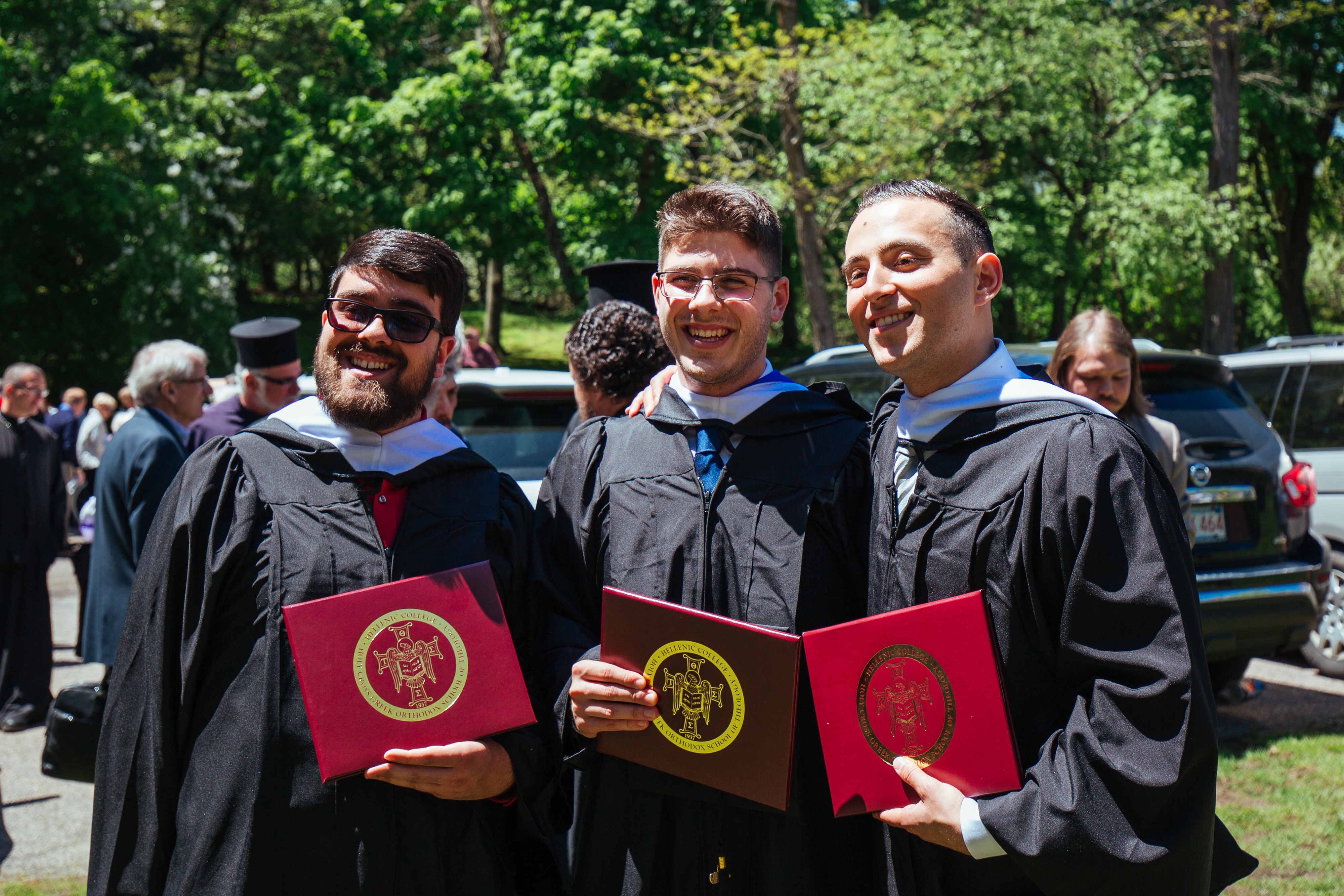 Hellenic College Holy Cross Greek Orthodox School of Theology conducted its 77th Commencement exercises on Saturday, May 19. Almost 600 people of all ages witnessed the impressive ceremony in the Pappas Gymnasium.

His Eminence Metropolitan Methodios of Boston, Vicar of the Greek Orthodox Archdiocese of America and Interim President of Hellenic College Holy Cross, delivered the invocation, after which the Holy Cross St. Romanos the Melodist Byzantine Choir led the singing of both the Greek and American national anthems.

HIs Grace Bishop Apostolos of Medeia, Chief Secretary of the Holy Eparchial Synod, then read a stirring message from His Eminence Archbishop Elpidophoros of America. His Eminence wrote, “There is no doubt in my mind that Hellenic College Holy Cross constitutes the heart and the jewel of the Archdiocese.” Noting that the theological school of Halki is known as the Hill of Hope and HCHC occupies what is often referred to as the Sacred Hill, His Eminence expressed the belief that there is “a profound link between our two hills.”

Greetings and congratulations were offered by George Cantonis, Acting Vice Chair of HCHC’s Board of Trustees, and Stratos Efthymiou, Consul General of the Hellenic Republic in Boston. Also congratulating the graduates and assuring all present of their organizations’ continuing support of HCHC were Jeannie Ranglas, First Vice President of the National Greek Orthodox Ladies Philoptochos Society, and Paulette Poulos, Executive Director of Leadership 100.

Dr. Bruce Beck, Interim Dean of Hellenic College, and Rev. Dr. Thomas Fitzgerald, Interim Dean of Holy Cross, paid tribute to the students and their parents’ role in shaping and nurturing them. Valedictorians Nickolas Eliadis, Hellenic College, and John Tsikalas, Holy Cross, spoke eloquently to their classmates in both Greek and English, expressing encouragement for the future and gratitude for the academic and spiritual education they received at HCHC.

After the conferral of degrees, His Eminence Metropolitan Methodios offered closing remarks in which he noted that “the evangelization of the world…has never been more difficult, never more necessary.” He exhorted the new graduates to etch in their hearts the advice of St. Paul to the Romans (12:9-22) that ends with the words “Do not be overcome by evil, but overcome evil with good.”