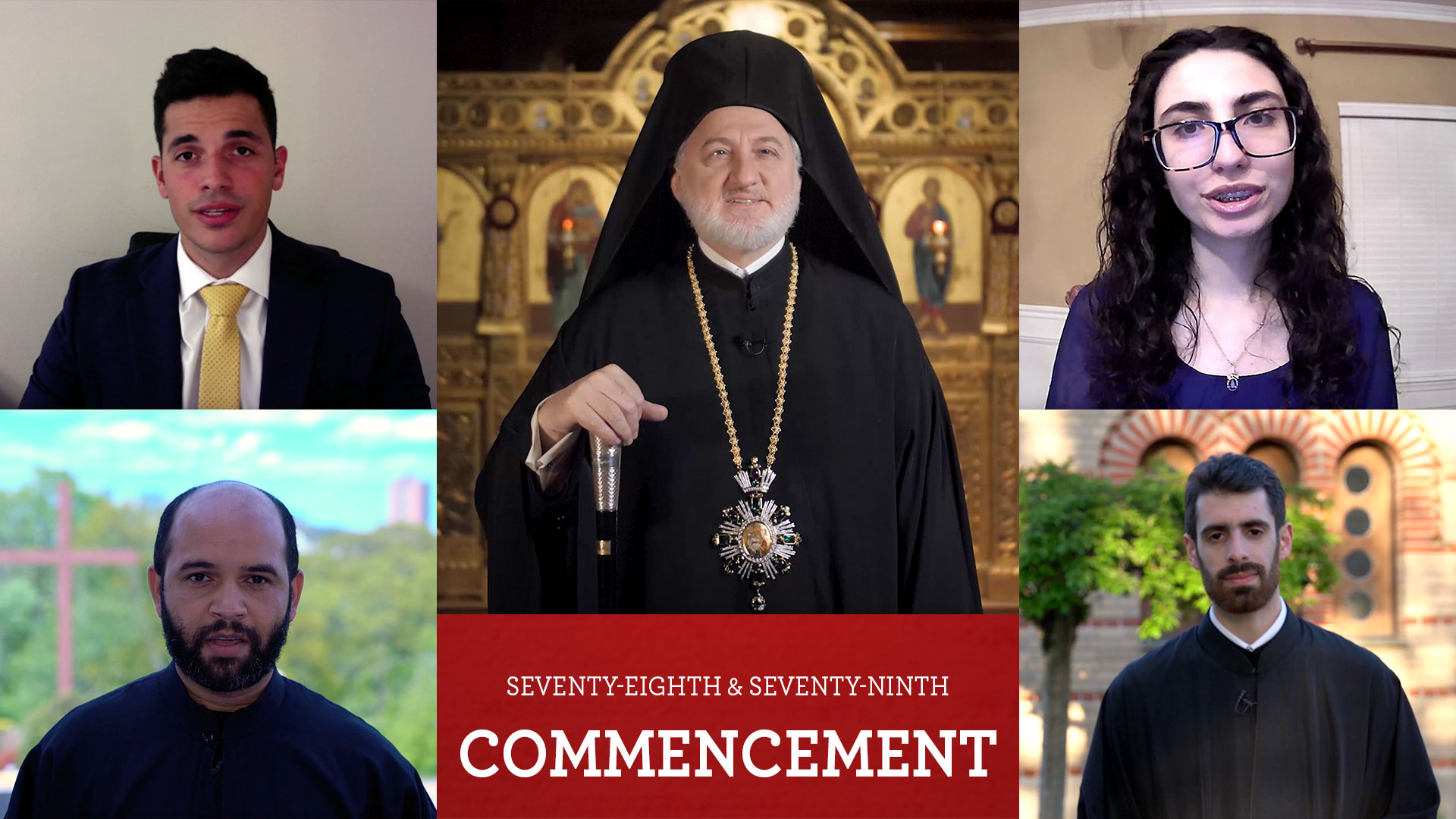 On Saturday, May 15, Hellenic College Holy Cross Greek Orthodox School of Theology held its first Commencement since 2019. The ceremony was unique in the institution’s long history for two reasons: it honored the classes of both 2020 and 2021 and combined prerecorded segments with a live, interactive ‘virtual kafeneion’  following the ceremony itself.

Before the formal program began, viewers watched an inspiring video capturing the spiritual, academic, and social life of the campus community. The video was created by Anberin Pasha and Emanuel Sabau, HCHC’s media specialists, both of them graduates of the School.

The team also produced the prerecorded program, which began with the singing of “Christos Anesti” by the Holy Cross St. Romanos the Melodist Choir under the direction of Rev. Fr. Romanos Karanos, PhD, Assistant Professor of Byzantine Liturgical Music. His Eminence Archbishop Elpidophoros of America then gave the Invocation, after which the Choir sang the national anthems of Greece and the United States.

Greetings were offered by Rev. Fr. Jon E. Magoulias, Vice Chairman of the Board, and HCHC President George M. Cantonis, who acknowledged the challenges faced by the graduating students over the last year, but went on to share words spoken by the School’s first Dean, Bishop (later Archbishop) Athenagoras Cavadas of blessed memory, to the first graduating class in 1942: “You will be, wherever you are, one with the school. The school will live within you. And you will never be separated from the school. You are the beginning of the school’s life, and as long as the school lives, you will be a part of its life.”

HCHC Commencements always feature two valedictory addresses, one for each school, but this year the audience heard from four valedictorians, each offering a different perspective on the common theme of courage and tenacity driven by faith.

His Eminence Archbishop Elpidophoros eloquently explored that same theme in his keynote address. “The way that Hellenic College Holy Cross has persevered through the pandemic is a lesson in ministry, in how the Church continues to serve in the face of adversity,” he said. In his concluding Archpastoral Exhortatory, His Eminence urged the graduates “to dream bigger, expand your vision of what the Church can be…Above all, go forth to build God’s kingdom of love in this world.”

To hear His Eminence’s remarks in their entirety and watch the complete ceremony, go to www.hchc.edu/commencement/