HCHC Honors 2019 Alumni of the Year 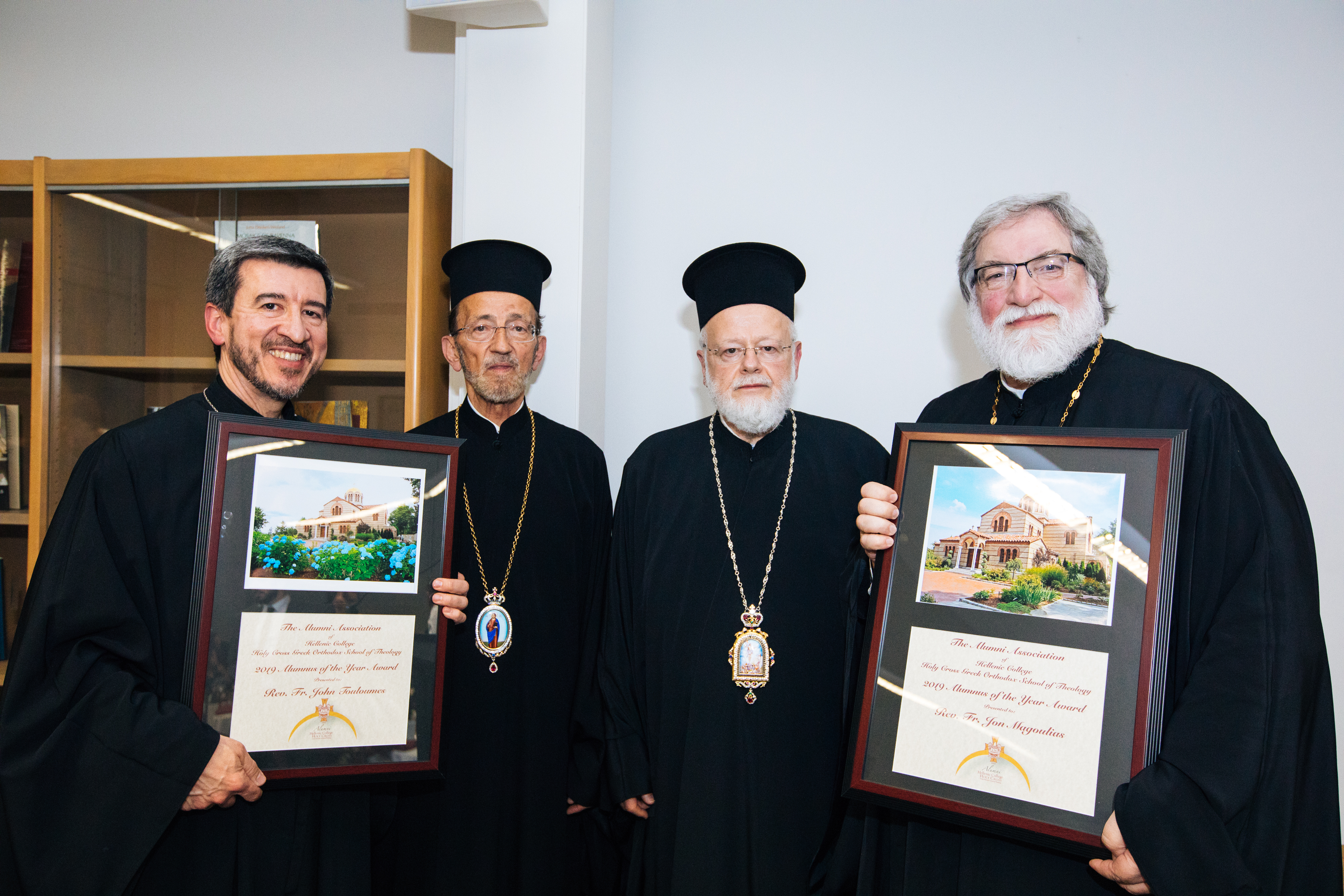 The HCHC Alumni Association honored two of its own as Alumni of the Year at a celebratory dinner on Thursday, May 16. Over the years since they graduated, Rev. Fr. Jon Magoulias (BA 1974, MDiv 1977) and Rev. Fr. John Touloumes (MDiv 1985) have faithfully served the Greek Orthodox Church in America in noteworthy ways and brought credit to their alma mater. Also honored at the dinner were the Hellenic College class of 1969, the Holy Cross class of 1994, and both schools’ classes of 2009. in his opening remarks, Rev. Fr. Demetrios Costarakis, President of the Alumni Association, referred to HCHC as “our second mother” and said to all the graduates assembled, “Welcome back home!” Hierarchs in attendance were His Eminence Metropolitan Methodios of Boston, HCHC’s Interim President, His Eminence Metropolitan Gerasimos of San Francisco, and His Grace Bishop Ilia of Philomelion.

Fr. Magoulias has been the pastor of Annunciation Church in Modesto, California, for 33 years, but first visited the parish as a student at Hellenic College on a goodwill tour in 1973. There he met his future wife, Georgia, with whom he has four children. His commitment and dedication to the Church extend far beyond his parish as he constantly strives to educate and inspire. He has led many pilgrimages to sacred sites in the Holy Land, Constantinople, Egypt, Jordan, Cyprus, and Greece. He has served on numerous committees within the Metropolis of San Francisco and the Archdiocese, and is a member of the HCHC Board of Trustees Executive Committee.

Fr. Touloumes has served as pastor of Holy Trinity Church in Pittsburgh, Pennsylvania, since 1993. After graduating from Holy Cross, he earned his Master of Business Administration degree from the University of Pittsburgh Graduate School of Business in 1986. He is also a graduate of the Pastoral Marriage and Family Counseling Certificate Program offered by the Antiochian House of Studies. He has been deeply involved in youth ministries on the local, Metropolis, and Archdiocese levels. He has served as a member of the Archdiocesan Council, the National Stewardship Commission, and HCHC’s Board of Trustees, and as President of the Archdiocesan Presbyters Council. Fr. Touloumes has also been actively involved in Orthodox missions, leading teams of teenagers and parents on service projects with Project Mexico, on the Blackfoot Indian Reservation in Browning, Montana, with YOCAMA (Young Orthodox Christian Missionary Adventures), and in Appalachia with FOCUS Appalachia. He and Presvytera Becky have three children.